In 2019, a record natural gas production of 3.68 trillion cubic meters was made by the natural gas companies. This shows an increase of 4% as compared to the previous year. This is due to the big uptick in natural gas production from Russia, which adds around a 3rd of global level growth. However, North America was the biggest gas-producing region which accounted for 20% of the global level supply, followed by 6.1% by Iran and 17.3% by Russia, whereby Qatar and Canada provided 4.8%. There is high-level demand for natural gas for the constant growth in the economy. Countries including the USA and China are shifting to cleaner-burning gas plants from coal-fired power plants.

Similarly, South Korea and Japan have also moved to natural gas from nuclear power in recent few years. In the global economy, the demand for various petrochemical products is increasing at a rapid pace. All such factors are suggesting the fact that natural gas will be an important fuel in the upcoming future and due to this reason, this industry should be noticed by investors. In this article, we are going to discuss the biggest natural gas companies by taking into account the list shared by Insider Monkey.

Saudi Arabian Oil Co. is topping the list shared by Insider Monkey in their post. This company is running as Saudi Aramco. The headquarter of the company is in Dhahran, Saudi Arabia. This company is operating as a sole supplier in Saudia Arabia for natural gas products which is the 7th biggest market of natural gas. Saudi Aramco is also involved in the exploration and production of crude oil. Wasit Gas Plant is the highly impressive gas infrastructure which is developed by the company. This Wasit-based Master Gas System has maximized the natural gas production and eventually the clean-burning gas supply also increased. The total revenues of the company are $329 billion.

The 2nd company on this list by Insider Monkey is Royal Dutch Shell. The headquarter of the company is in The Hague, Netherlands. The company is the biggest firm which is running its business activities in around 70 countries with the sales volume of more than $300 billion. The company is engaged in the discovery, advancement, and sale of gas, oil, and several other petrochemicals all over the world. Around 356.8 billion cubic feet of gas has been generated by the company with the help of African subsidiaries. The total revenues of the company are $311.6 billion. Do you want to learn about other natural gas companies? Check out here 15 Biggest Natural Gas Companies In The World. 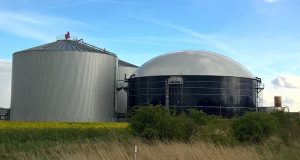