Weapons are usually defined in a narrow and simple way as those devices that are utilized for incapacitating and destroying the enemies; therefore, weapons are utilized during wars, but these are also in the use of military and police forces as repressive and preventive measures. Weapons are also used for the purpose of hunting and shooting training for self-defense, and the majority of the time, these weapons are misused as well. Similar to other things, a number of changes and progressions have been made to weapons in history. The first type of weapons that were used by men were wooden spears and unshaped stones which were used mostly for hunting and self-defense from animals. With passing times and the advancement of technology, these weapons also experience a revolution. Now, let’s jump to the list of 5 Highly Powerful Weapons as shared by Insider Monkey.

FOAB or “Father of All Bombs” is in 5th position. This is an Aviation thermobaric Bomb designed by Russia. The weight of this weapon is 7,100 KG and the strategic bomber “Tu-160” has been used for dropping it on the test target. This is the powerful vacuum bomb of the world and its strength and efficiency is equal to that of nuclear weapons but these weapons are not creating any pollution. These thermobaric weapons are considered as inhumane as everyone who is exposed to these weapons usually suffocate at first because of low-level oxygen and after that are crushed due to shock waves and get burned because of high temperature. The Russian bomb is smaller in mass and greater in power as compared to the American MOAB. The explosion power of FOAB is equal to the explosion power of 40 tons TNT, whereas 10 tens TNT explosion power is equal to MOAB. The radius of the Russian bomb is 20 times bigger than the American bomb. This MK/B53 is on 4th number in the list and was developed by the USA at the time of the Cold War. This is a high-yield thermonuclear weapon with a yield of around 9 megatons. This led to the formation of a fireball with a diameter of up to 3.4 mi and any person within the radius of 20 miles will experience lethal burns. AEC or Atomic Energy Commission is the manufacturer of this thermonuclear bomb. This was the USA based agency started after the second world war. For more information, you can check out 15 Most Powerful Weapons In The World. 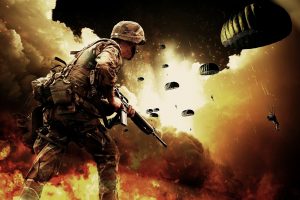