Before starting Amazon, Jeff Bezos was working as the vice president of Wall Street company. The key concept behind starting Amazon was selling books. Amazon was envisioned by Bezos as the biggest bookseller just like the biggest Amazon river in the world. From the very start, he acknowledged the significance of developing a brand, a concept that is not properly understood by the majority of businesses. The firm was developed initially for capitalizing on particular growth of the web in the 1990s and he made a products list that can be sold easily on the internet including computer hardware, books, videos, and software. Due to the dedication of Bezon, Amazon began generating weekly revenues of more than $20,000 from 50 different states before going public in the year 1997. With the passage of time, Amazon experienced huge growth, this is particularly true for the past decade. Amazon began branching out in different sectors and developed a huge presence. This is now considered as amongst the biggest retailers and the highly interesting fact is that all the biggest retailers have physical and online stores while Amazon is only online with no proper physical stores.

The purpose of writing this article is to list down some of the ways which are followed by Amazon for earning revenues and make money. Let’s start with some of the items answering “How Amazon Makes Money”. Without any further delay, we are starting with Audible. This was the first one of its type offering audiobook services through an online podcast and audiobook store. This was started in 1995 and Amazon bought it for $300 million in the year 2008. Around 200,000 different audio programs are present. This involves all kinds of books from a different genre, podcasts, speeches, comedies, radio shows, interviews, and other audio

periodicals. This is amongst the biggest employer of actors inside NY City. The next way we have selected is Amazon Logistics. In the case of billions of customers with a high level of demand for products from all over the world, then you require a large fleet. There is a minimum of 60 cargo planes of Amazon that are more than owned by the biggest airlines, along with 60,000 trucks and more than 100,000 on order.  If in case Amazon stepped in the logistics industry and not merely providing products to customers from its company website, this could easily beat UPS and FedEx.

This is not the end, you can find more ways through which Amazon is earning by checking our How Amazon Makes Money shared by Insider Monkey. 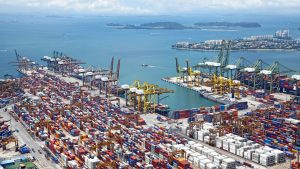